Personal supervision of every aspect of the project, from inception to completion, set Niall Linehan Construction apart from the rest 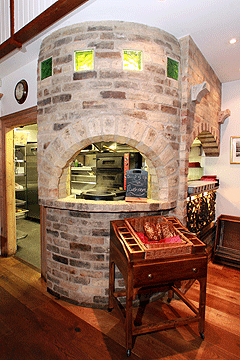 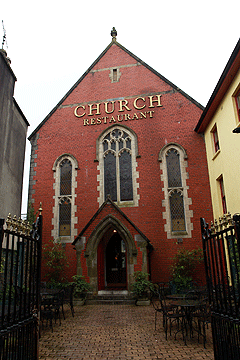 Niall Linehan has been working within the family business for the last number of years developing small and medium-sized projects. These projects range from one and two unit developments to quite complex projects such as restaurants. Niall Linehan Construction has a broad spectrum of completed projects from conservation work on period buildings to contemporary new builds.

You will find that we can assist in all aspects of any project from pre-planning to the final finishing out, including furnishing and interior design. We incorporate salvaged materials into our designs where appropriate, which we source locally, and in Britain and on the continent.

As an example, for one of our recent projects we sourced an 18th century staircase from an old French chateau in Lille, France, and then fitted it into ‘The Church Restaurant’ in Skibbereen. On that particular project we took the restaurant that had been gutted by fire, and guided it through the planning stage, then the reconstruction and finally right up to the small details like the cutlery on the table to the final re-opening.

Using contemporary designs we marry them with period style to achieve modern, classic living spaces. Over the years we have gained a reputation for our quality of finish. This is largely due to the fact that we use cabinet-maker standards when finishing out a project, employing our own team of highly-skilled tradesmen.

Some of the projects we have completed that may be of particular interest are:
Conversion of former stables(1750) into two luxury town houses.
Conversion of period building (1865) into 4 apartments.
Newly built Georgian-style 2-story house.
Conversion of 18th century building into two 1 bed apartments.
Contemporary new build complete with geo-thermal heating, heat recovery ventilation and an air tightness specification.

To ensure that you have a good experience we deal with the conservation officers, fire officers, health authorites, health and safety officers, planners, quantity surveyors and engineers to bring each project to a speedy and successful conclusion.

People often assume that such a high standard finish means increased costs. This is not necessarily the case, and we can price the job to suit your budget!

We offer a unique service in that we can take a project from design stage to completion doing all the work ourselves with no sub-contractors.

Please call us to arrange an appointment to discuss your project.

The following article about the restoration and conservation of The Church Restaurant in Skibereen, after it was burnt to the ground in a devastating arson attack, originally appeared in the ‘Southern Star’ newspaper.

The Church Restaurant in Skibbereen began trading again last week and the queues were out the door! “We are delighted to be back in business,” said the owner, Regina Daly. “The response has been fantastic, with so many people turning up to wish us well.”
Everyone in Skibbereen was devastated when the famous landmark building was gutted by fire in an arson attack on April 9, 2006. A Moldovian man had opened four spare gas cylinders and set the building on fire. He was prosecuted and sent to jail for the offence.
The former Methodist Church was all but destroyed, but Niall Linehan Construction has brought it back to life. Regina told The Southern Star: “I love being back, but I wouldn’t be here if it wasn’t for Niall – he has done everything from having the stained glass windows authentically restored to ordering the uniforms and menus.”
Niall Linehan, who is an expert in restoring period properties, confirmed that €1.1 million has been spent on the project. “Essentially,” he said, “the building was burned to the ground and the rain had penetrated the whole building. “We put the roof back, repaired the building, and started from scratch in terms of re-creating some of its very fine period features.”
“We imported Portland stone to restore the surround around the large stained glass window at the back, and we also had to restore the mullions that had been cracked in the fire.

“When it came to fitting out the building internally, we couldn’t use new stuff because it would stick out a mile, so we sourced the oak staircase from a mansion in Lille in France.
“We got steel from Wales that dates back to 1870 for use in the balcony; and the front bar counter, which dates back to 1850, came out of a church in Wales.”
But what is perhaps most impressive about the restoration work is the stained glass windows, the likes of which many people feared they would never see again.
Niall said the work that Abbey Stained Glass of Dublin did in re-creating the windows from scratch – using the same stained glass method that was used six hundred years ago – was nothing short of amazing.
He said: “The stained glass in both the front and back of the building are identical to what was there before.”
Niall admits he is proud of the fact that this beautiful old building, with its geometric, simplistic shapes, has been given a new lease of life and will be there for future generations to admire.

“I love being back, but I wouldn’t be here if it wasn’t for Niall – he has done everything from having the stained glass windows authentically restored to ordering the uniforms and menus.” 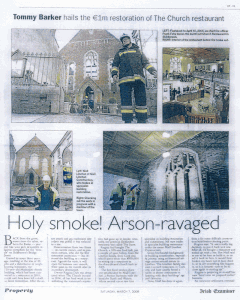 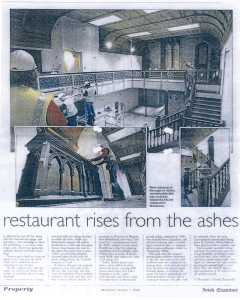