The right berth if you like your views nautical

Tommy Barker viewed a Victorian home that gets better with age

By Tommy Barker
No 2’s location is spot on for families, with a national school close to the entrance to Sydenham Terrace.

Some things just get better and better with age — and the fine three storey Victorian home at No 2 Sydenham Terrace is one of them.

Now coming up on 200 years of age, we last featured this classic in Monkstown, Cork harbour in these pages back in 2003. Then, as the private home of an interior designer it already looked the business, lush in old heritage colours, richly draped and swagged. It had a €750,000 asking price back then; almost a decade later, No 2 is back up for sale, in even better health, after money and attention’s been lavished on it, and it has all been made even more family-friendly, especially thanks to the quality of its sun-room improvements.

No 2’s asking price as a true walk-in job (shoes off, mind the cream carpets, though) after all the extra spend is €620,000, via estate agent Cearbhall Behan of Frank V Murphy & Co.

The adjoining end-of terrace No 1 Sydenham went up for sale in August of last year, and sold within weeks of hitting the market, also featuring in these pages, and the price register shows it selling for its asking price of €495,000: there’s been a full complement of builders in there recently, doing upgrades for its new owners.

Whoever buys No 2 would be hard-pressed to find much, or anything, to tackle or spend much more on. These terraced homes, eight in all, were (like much of Cork harbour’s finer Victorian homes) built for British navy officers. While they look relatively modest from their rear lane main access (see picture on page 10) with two-storey facades, their face to the public, to Monkstown’s harbour fringes, and to the sea, is a far more impressive and impassive three-story presence, or more correctly, two storeys over lower-ground rooms.

Thanks to very clever, subtle touches and a sensitively added conservatory, No.2’s best space for family life is this lower ground level, home to a kitchen and adjoining family room, making for a 30’ wide and 15’ deep great space, with immaculate oak parquet flooring, and this same floor (sourced from Wilsons’ architectural salvage yards in Northern Ireland) continues into an elegant 25’ by 10’ conservatory/sun room, Victorian in style, but not slavishly so.

While the house’s very best views are from the upper rooms (with five windows across the width), this sunny spot is where you’d want to spend daylight hours, and that’s why one end is bulwarked by a deep day-bed, a true lounging spot, and ideal for cuddling up on with the kids (fabric-meister Ken Jackson did most of this house’s soft furnishings, sofa coverings, window seats, bolster cushions and curtains).

Handily, for tidiness sake, there’s huge storage capacity in deep drawers right underneath. The building work here was done by Niall Linehan of Linehan Design, and the conservatory is built in hardwood, triple glazed and has twin, pitched roof lights set into the ceiling. Exposed reclaimed brick’s a bit of a feature here in a back wall, set off by a creamy mortar, and there’s more than enough room here for a casual dining space, table and seating. French doors open this room out to a re-done large terrace in limestone, and the garden runs down over 100’ towards the views, stepped down on a few tiers, and with a mature tree area home to a playhouse and a henhouse, recently evacuated by a wily fox who quite approves of the modern trend for hen-keeping, even if he doesn’t quite get the more holistic ethos.

Back from the sun room, the kitchen’s an absolute stunner of hand-made simplicity, with hand-painted units now lightening the look (there used to be stone walls under countertops in the previous ownership), with double Belfast sinks, a Rangemaster stove, island with white marble tops, a feature plate rack and larger presses, recessed lighting, plus a feature pendant light for mellow mood-setting.

Across this room, by the sprawling sofa, is a specially-sourced, super-plain old white marble fireplace, with limestone insert, and a cast iron open stove/enclosed basket. Either side of the chimney breast are storage presses, done to the same exacting joinery standards as the kitchen units.

Behind the kitchen, under the house’s centre, is a utility/laundry room, with access to an elevated storage space to the back of this lower ground level, while the stair return going back up to the main, entry level has a small play/storage area with skylight.

Formal rooms are all on the entry/midships level, off a graceful tall hall, with Corinthian columns flanking an entrance to a study/den, with walls lined in bookcases and shelving: though separate, it’s almost an ante-chamber to larger rooms, and has window seats looking out to the stone-flagged landscaped entrance courtyard, gate and parking.

The Regency feel kicks off right away in the main reception hall, with those columns, stained-glass window on the staircase, and a mirrored glass display cabinet hints at the tucked-away grandeur of the 18’ by 15’ drawing room, with harbour in view beyond.

This restful space, with white Georgian fireplace and mellow Farrow and Ball hues on the walls, has three arched sash windows looking south-east over Monkstown, to the church steeple, shipping and naval activity, as well as to the skeletal cranes at the former Verolme. If you like your views nautical, you’re already berthed here.

These terraced houses are quite wide, so despite the width of the drawing room, there’s still scope for the formal dining room to have two similar, arched sash windows, and lofty twin old pine doors on hefty hinges link this to a second living room: both of these airy rooms have age-appropriate fireplaces, unfussed ceiling cornice work and roses (they’re Victorian, after all, not Georgian,) and carpets are a neutral, fawn shade, similar to the upstairs bedrooms’ level.

A central carpet runner wends its way up the stairs and it twists and turns to the first floor proper, where all four bedrooms are ranged off the landing, and three of the four have the most elevated waterways views of all. And, three of the four bedrooms have cast iron fireplaces, making for seven chimney-pieces in all. Even if the bedroom trio are unlikely to be lit very often, or at all, they’re still focal points for candles, dried flowers or other features.

There’s no en suites, so bedrooms keep their original proportions and freshness, and the main family bathroom (like the second shower room and guest WC) has encaustic tiles sourced from Fired Earth in Dublin, colours are in shades of grey, the bath’s a free-standing cast iron one, double ended with central tap, and there’s a separate shower enclosure.

No 2 has all mains services, an alarm, double-glazed sash windows and a huge comfort factor, and given the number of open fireplaces, the BER rating’s a pretty decent D1 for a home of this vintage.

The relocating owners have clearly enjoyed their time and effort here, the family’s grown in number during their tenure, and they reckon they’ve the energy still to take on another house and family home project.

No 2’s location is spot-on for families, with a national school close to the entrance to Sydenham Terrace, and community-minded Monkstown has a tennis club, sailing club for dinghies, a new marina for larger craft, and a well-regarded golf course up above in the wooded demesne. A recent arrival is an Italian cafe, while a second bar by the busy Bosun restaurant is currently preparing to reopen in the coming weeks.

One of No 2’s owners is in the navy, and so had work at Haulbowline in his sights while here, and Cork harbour’s many sizeable employers are within a short drive, while Cork city’s an easy commute if hitting Rochestown mid-way at handy times. The problem is, No 2’s so relaxing, you won’t want to leave… so it’s just as well there’s a home office.

VERDICT: With 3,200 sq ft of sheer quality and comfort, in a grandstand Monkstown setting, No 2 Sydenham Terrace works on every one of its three levels. 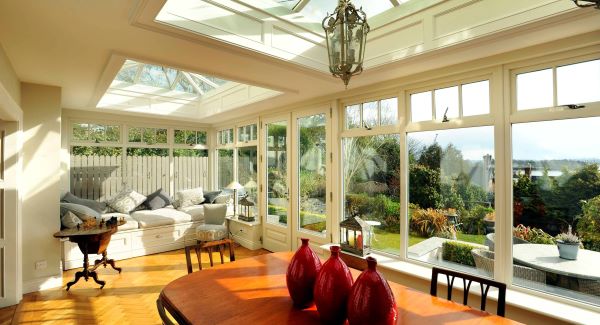 See the original article in the Examiner

Niall Linehan Builders Cork carried out the refurbishments and conservatory and terrace extension to the house, a Victorian period residence at Sydenham Terrace, Monkstown, Cork for naval officer serving in Haulbowline Navy base.

Further Hotel Refurbishment Nestled in the leafy suburbs of Cork, the Maryborough...

What is a BER

A Building Energy Rating (BER) Certificate is an indication of...

Cork energy efficient homes have come a long way in...

Niall Linehan Construction are currently engaged in constructing a new...

The following piece appeared in the Irish Examiner Newspaper about...

Daffodils and all kinds of everything at Bally…beauty Tommy Barker...